The Misdirecting of The Light Workers

I first published this in a Facebook note on 28 August 2010. On June 2011 I re-edited it and republished. My point is as relevant today as it was back in August 2010, maybe even more relevant now that 2012 is upon us, so I have decided to circulate it via my blog.

I am growing increasingly concerned at light workers being manipulated and sent off in the wrong direction.
It is my firm belief that many of us have chosen to be here at this time to help the planet and its inhabitants through a most extraordinary shift in human consciousness. The birthing process can be a painful one, but it gives rise to wonders beyond our current imagination.

The people who control our current reality operate at a very low vibration, and so they constantly strive to keep our vibration low, the many light workers who have been incarnated at this time are a great threat to them, and so they have pulled out all the big guns in an attempt to misdirect them.

I myself have been targeted by these people, and when I started the LightWorkers of Ireland Group, you would not believe the invitations I got to secret groups on Facebook! I joined them all; I am still in them, as I want to keep an eye on who is in there, and what exactly they are up to.

I will give you one example. I was invited to join the most secret and exclusive group ‘The Secret Order Of The Nelphim’, and you need not search for that group on FB, It will not show up! I was told that they recognise their own, and only recognised descendants of these Godly beings were invited to join the group!

The wall is full of people just cooing about how wonderful they are, and how honoured they are to be there! I see these groups as a blatant attempt to appeal to the ego, and separate true light workers and misdirect them. The main message that they put across is that we actually do not need to pro actively do anything to assist in the coming changes; all we need to do is sit about and think thoughts of love and light! They also promote that most famous of Crowley’s beliefs ‘Do What Thou Will’, and constantly promote the idea that we should all put personal pleasures above all else!

Facebook and all the social network sites are just full of these love and light groups, which all have the same message, sit on your ass at home, do nothing, do not mix with radicals, and just think lovely love and light thoughts! The saddest thing is, I truly believe that it is true light workers who have been sucked into this mindset! And while they should be out there doing something to help us through the coming transition, they are doing as they have been instructed!

This brings me to the Pleaidian and Galactic Federation, I have been observing their information and vids for a few years now, and I am becoming increasingly concerned about them. Two people on my friends list have now changed their names to ancient Egyptian names. Two days ago I had a run in with one of them, she calls herself an Indigo, but seems to have no understanding as to what an Indigo is! Indigos were sent here to smash the current corrupt system, so that the children of light can re-build the new one, on a thread on her profile she said the following:

Meritaten RahaNamsai
‎@Sandra. There is lots and lots of information regarding Indigos in My Network and there are many ways in which Indigos,Crystal, Starseeds and Rainbows carry out their purpose here Sandra, it is called Lighworking as you know and all are doing their part in assisting the awakening and the elevation into higher consciousness of this evolution of Gaia. It is the shifting of humanity out of 3rd dimension Energy into 5th dimension energy. I am of 9th Dimension Sandra and what that means is I see, know and feel the dulaity as a beautiful lesson in order that enlightment is reached through this duality. I see the Love and Light in a Situation of duality as it provides an opportunity for each person to ascend into a higher consciuosness. A Light System which is what we are has choices as to the physical experience they wish to experience. This is the Ultimate law of Universe. The old Paradym of 3rd Dimension has not served us or Giai and this is evidently apparant in the lessons which have been learnt in the past. Ghandai was the prime example of 9th dimension Sandra and one of his many wise words was this. "Be the change you want to see in the World" Universal Energy Sandra works on this principle. If you are Peace, this is what Universe Provides. All of creation is based on this principle. What you give energy to is what manifests into physical energy. The greatest change each of us can do in the physical is to be the change ourselves. Giai our world..in that I mean Mother Earth has no need to change Sandra..she is perfectly aware of who she is and her purpose for being. She has been fulfilling her purpose in Love for Eons..it is us who need to change and I hope in some way I have explained this concept.  Endless Love Sandra.

As you can see, they take Universal truths that resonate with the soul, then they casually mix in the horse shit! Meritaten, who was formerly known as Margaret Ring, now believes that she has ascended to the ninth dimension, and is on the same plane as Ghandi!!!!!!
I told her I would be expecting great things from her now that she was on such an elevated plane, and that Ghandi single handily changed the nature of India, and the world, and his non violent protests were still used as an example by activists today to change the status quo, I enquired was she maybe going to Free the people of Palestine first, or possibly smash a worldwide network of paedophiles....Namaste was her response. I expect she has not thought it through yet! Then she blocked me!

Cult rule number one, ‘Others who are not as elevated as you wont understand you, so distance yourself from them, they will only bring you down’!

You will also note that she is promoting the idea that Gia is living out her own personal lessons, and she needs no help from us to survive!!! This is a very dangerous concept to be promoting, Mother Earth is sick, she is being attacked at every level, BP oil spill, Fluoridation, chem trails, GMO...etc etc, she needs our help like never before in the history of human kind, but this ‘love and light’ brigade are suggesting we all do as they do....NOTHING!

You tube is just full of vids aimed at the spiritual, and they are all promoting the same message. Many of the so called channelled messages I find particularly disturbing, they are urging light workers to do nothing, and that a heavenly Galactic force is at work and will just come and save us all!!! I truly believe that there are higher powers assisting us at this time, but it is an absolute cop out to believe that they will just come and save us, without our co-operation with them!

I watched a vid a few days ago, and it had the most relaxing music, it really would have put you to sleep, then when you were ‘in the zone’, in the most relaxed and suggestible of places, it started to flash pictures of pyramids, the eye of Horus, and other NWO symbols. We all must be wary of these things at all times. We are all divine sacred creatures; do not let anyone convince you that you are more divine or special than anyone else. Some of us may have more spiritual knowledge, and be further down the spiritual path than others, that does not make us any better than someone who has just stumbled onto the Spiritual path, we all had to start somewhere!

From my observations the main tool they are using to suck light workers in is the ego. How amused they must be that so called light workers are so easy to manipulate. Like all cults, they tell their victims that they are very special, and that they are not like other people, they may even tell them they are ascended Masters, etc etc, they mix this with many Universal laws and truths, and then they urge them just to work on their vibration and all the other problems in the world will be sorted out by the Galactic federation, or some other such Heavenly body. I see the hand of that renowned Satanist, and self professed inventor of the New Age Movement Henry Kissinger at work with all this mis-information.

If you really want to higher your vibration, start helping humanity in any way you can. Plant a tree, help Mother earth. Meditate by all means, but do not get so engrossed in your personal spiritual journey that you forget to help others along the way.
Thank you for taking the time to read this.
Stay Blessed, Sandra  Barr

Addendum:
I am now adding Little Grandmother to the list of con artists. There is also a growing number of groups professing to be Native American Indians, they are not, they are scam artists, who are firstly misdirecting light workers, and secondly making a fortune in the process. I am also very wary about the Saint Germaine movement, they actually boast about being Illuminated and say he was the founder of the Illuminate! I read a very interesting link about him a few weeks ago, if I can find it I will post in the comments section.
Please see attached vids about Little grandmother and the Native scams.
Real Native American Indians Expose FAKE Natives and the New Age


There is so much happening now, and so many people are "Wakening Up", that the powers that be are throwing all they can at us, stay alert people, and dont get sucked in!
Their "New Messiah" will likely be presented any day now., be wary of the false prophets!
Sandra Barr
This excellent vid is under 5 mins long, and it sums up my point to the T. people need to take responsibility, there is no Messiah/aliens coming to fix things, the system is broke, we do not need new politicians, we need a new system, and we need to take responsibility, our apathy contributed to the current state of affairs where bankers and corporations are running the world.

An excellent vid by Carey Burtt, “How ToStart Your Own Cult". 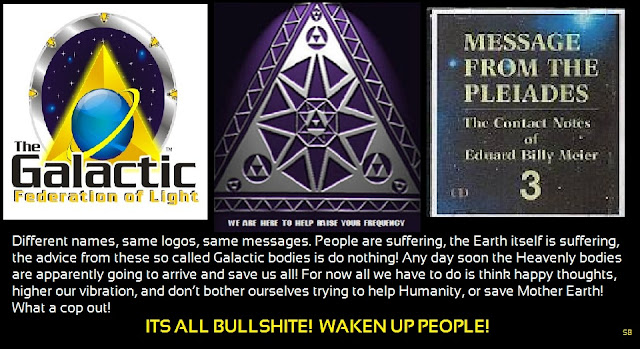 The Misdirecting of the Light Workers