Peter Gabriel, mystic or in the know?
The Millennium Dome was officially opened on 1/1/2000. The Dome had been built on the most toxic waste dump in Europe, Millions was spent on it, and it was shrouded from start to finish in controversy. It is now called the O2 Arena, O2 as in Oxygen, quite ironic when you think it was built on a site that used to house 7 MILLION litres of tar and other toxic waste which was never rightly disposed off and still emits toxic gas!
Link Government web site, detailing the extent of the "contamination" at the Dome site, and how it was contained, rather than removed or treated. By contained they mean they put a thin layer of concrete over it! Other sites say that the nature of the contamination was so severe, that the soil could not even be moved, as moving it would have contaminated everywhere between the dome and where it was moved to. Trees at the dome have to be planted in containers, as they would die if planted in the soil around the dome.

Peter Gabriel was charged with writing and performing the sound tract. This was the UK’s official new millennium celebration; it was supposed to reflect all our hopes and dreams entering the New Millennium.

So your thinking, I bet it was all love and joy, songs about world peace, brotherly love and harmony….
Well that’s not quite what Mr Gabriel had in mind for the new millennium; the entire show was about death, destruction, survival of the fittest and washed down with an apocalypse. One of the tracks "The Tower That Ate People", was as if he was singing about 9/11, only he was singing it 21 months before 9/11 happened!
Oh how the dignitaries clapped and enjoyed the whole thing! Prince Philip showed up in a black tie and coat like he was on his way to a satanic ritual or funeral, the Queen wore orange!!!! With a black hat, Tony B’ Liar a dark suit and red tied, blood red…to remind us he is bloodline, and his side kick wore purple. 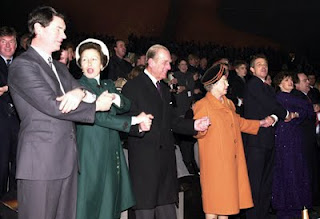 Anyway, back to the show! The soundtrack was released on 29 August 2000, it was called OVO.
The elite inbreeds who control the planet like to play with words, like the Dollar sign is the  Egyptian Goddess ISIS, the S’s are over lapped. If we over lap OVO we get the sign for “V” for vendetta, also used as the sign for anarchy.  First clue that Gabriel is a mystic, second clue one of the tracks was called “Revenge”, as in Vendetta.


So lets take a look at what the messenger had to tell us!
1.  “Low Light”, (instrumental) that could be either the sun going down or rising.

2. “The time of the turning”, I will add my comments on the lyrics in italics.
In the big house, where the sun lives,
With the wall so white and blue,
In the red soil, all the green grows
And the winds blow across your face,
They blow across your heart.
It's the time of turning and there is something stirring outside
It’s the time of turning and we better learn to say our goodbyes
All the earth breaks, like stale bread, and the seeds are folded in the soil,
Oh the sun pours, then the rains fall, while the roots reach out through the ground.
Say goodbye, earth breaks, roots come from the ground!, When a plants roots are exposed it dies. Well,
I’m sure this opening track got the celebration off with a great start!

It’s the time of turning and there’s something stirring outside,
It’s the time of turning and the old world’s falling
Nothing you can do to stop the next emerging
Time of the turning and we’d better learn to say our goodbyes.
In your face or what! He is saying that our world is falling apart, and we can do nothing about it, the “New World” is coming, with the death and doom predicted in the previous verse, and we must learn to say “goodbye”, goodbye to what? Life as we know it? Our loved ones?

3.  Instrumental, “The Man Who Loved The Earth/ The Hand That Sold"

4. “The Time of the Turning The Weavers Real”.

Father, son, locked as one, In this empty room
Spine against spine, yours against mine
Till the warmth comes through

Remember the breakwaters down by the waves
I first found my courage
Knowing daddy could save
I could hold back the tide
With my dad by my side (is his Father a sea God?)

Dogs, plows and bows
(all astrological, Dogs- canis major and minor, or the hunting dogs of Osiris, Plow… Bows- Osiris or Sagittarius)
We move through each pose, struggling in our separate ways
Mantras and hymns unfolding limbs
Looking for release through the pain
Pain….more doom and gloom!

Can you recall how you took me to school
We couldn't talk much at all it's been so many years
And now these tears guess I'm still your child.

Bare in mind this was 21 months previous to 9/11, Peter the great messenger from the Gods forewarns of the towers falling!
6. The Tower That Ate People : (9/11)

There's a rumble in the floorboards, no shutting out the sound
And the workers are below me digging underground
Feel the building all around me
Like a wrap of armoured skin
But the more we are protected
The more we're trapped within

7. Revenge. Instrumental (9/11 lead to the invasion of Afghanistan and Iraq, revenge…apparently!)

White Ashes is a Buddhist term for all that is left of us after cremation.
This could also be referring to the Twin Towers collapsing, and the white/grey dust that stormed through the Streets like a tsunami.
An Ion is an atom, or a group of atoms that has an electric charge.
Eon and Ion are also variations of the name "Ian". Eon is an era, so yet again he is saying goodbye to our world.

White, white ashes, building crashes down.
So well, pretend it's all well conceived, build solid as steel, stuff we believe.
Now he's gone. Ion is gone, his time is done.

Mamma's little boy, doing good, Mamma's little boy did all he could.
Now he's gone, Ion is gone, time is done.
The Dome where he was preforming is right beside the Greenwich Observatory, where literally time begins, it is on the Zero Meridian. "Time is done", that sounds a bit ominous! Should there be a false flag staged at the Olympics, at the O2 Dome, it would quite literally be symbolic of an end to time. And he seems quite keen that time should end! 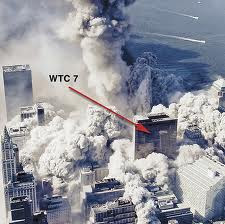 
9. Downside-Up
Back to 9/11!
I looked up at the tallest building
Felt it falling down
I could feel my balance shifting
Everything was moving around
These streets so fixed and solid
A shimmering haze
And everything that I relied on disappeared

Downside up, upside down
Take my weight from the ground
Falling deep in the sky
Slipping into the unknown
All the strangers look like family
All the family looks so strange
The only constant I am sure of
Is this accelerating rate of change 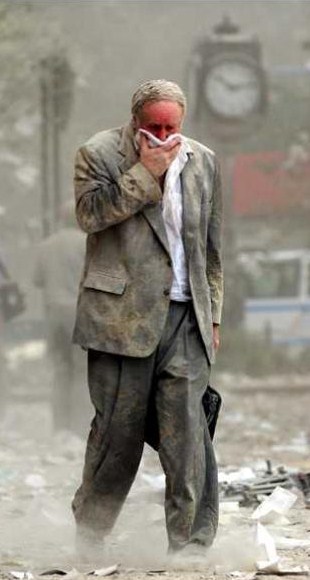 Downside up, upside down
Take my weight off the ground
Falling deep in the sky
Slipping into the unknown 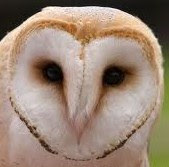 OVO could also be referring to the Owls face. In Bohemian Grove in California they worship a 40 ft stone owl (Molech).
Also the demonic entity Lilith, feared from ancient Babylon and beyond is represented by an owl. It is said that when human sacrifices are to be made to Lilith, they place a statue of an owl on the sacrifice site before the sacrifice.
He managed to say OVO 18 times in this song. 1+8=9, the number of death and destrustion to the Satanic elite.

The head of Balphomet in an invertedpentagram, this symbol is used by Satanists.

Observe the "OVO"! The name of the show was "OVO", and the soundtrack released the following August was also "OVO"!

This song also reminds me off the people who jumped from the buildings to their deaths. Plus if we put the V in the circle of OVO, and turn it upside down, you get the pyramid in the dollar bill. What a joyous celebration of the new millennium this must have been!


10. The nest that sailed the sky. Instrumental

11. The tree that went up. Instrumental

And so ended an evening of frivolity and joyousness…only kidding, I'm sure people left and topped themselves!
Peter, derives from Pater, Father, so is Father messenger Gabriel a prophets, a mystic…..or in the know of what was to come!
I will leave you to draw your own conclusions, I have certainly drawn mine! 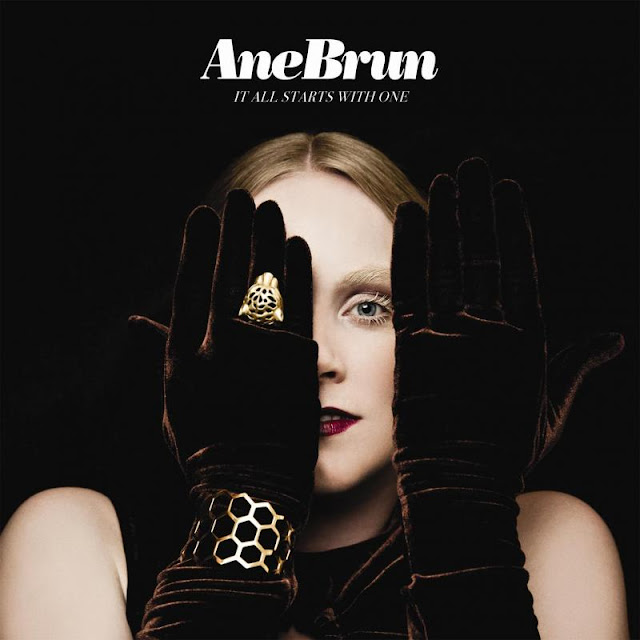 I have not linked any of the tracks, I listened to them, and they are bloody woeful! Most of them can be found on You Tube should anyone want to hear them. 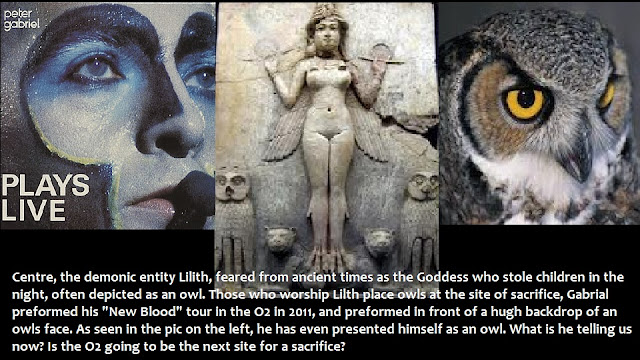 I am adding to this blog as I find the info, the more I find about this man, the more alarmed I am getting! His "New Blood" tour is all about more death, doom and destruction, all about darkness, red rain, blood! I am now in no doubt that his "OVO" at the opening of the Dome was a hidden reference to Lilith. This man is touring the world constantly, bringing his messages of death and doom around the globe, all laced with Lilith's symbols.
Gabriel Performing in front of the owl at the O2

The cover of his "New Blood" Album shows blood that has been altered, similar to the blood of Morgellons suffer's whose blood is altered. The main culprit being blamed for Morgellons is Chemtrails, which are carrying various man made particles which when they invade our bodies are changing our blood and DNA. So what the hell is his "New Blood" really all about?
Max Igan Brilliant documentary "Trans-Formation", parts 5/7, looking at how chemtrails is altering our blood.

Link Seems Im not the only one who thinks Gabriel may be working on the dark side. This web site celebrates satanism, and has published the lyrics of Gabriels "Solsbury Hill", as celebration of Satanism!