Kony 2012 Campaign exposed!
Prior to yesterday morning (07/03/2012) I had never heard of Invisible Children, but by bedtime they were fking everywhere! I normally put a great deal of time into my research for blogs, but this demands an immediate response so I will keep this brief.

“Invisible Children” is a non profit charity, (apparently) founded by three film makers Jason Russell, Bobby Bailey and Laren Poole. On the 5th March 2012 they uploaded a 30 min vid onto You Tube, within 3 days it was viral on the net and had received 35 million hits.
Its aim is to bring attention to Joseph Kony. Kony heads the Lord’s Resistance Army, he operates in Uganda, Sudan, The Central African Republic and The Democratic republic of Congo, and has reportedly been responsible for the displacement of 2 million people, and the abduction of 66,000 children to fight in his child army.

For many years he has been committing the most vile crimes against humanity, his army have abducted children, used girls as sex slaves, and boys as Child soldiers, he really is a vile man, and should be stopped. IC has released a video highlighting Konys crimes….Good you’re thinking……No not good!
While it is good that Kony be brought into the spotlight, IC have embarked on a campaign to make him famous, to this ends they are supplying bracelets, posters and T Shirts, with the slogan “Kony 2012”. Not “Stop Kony” or anything that might highlight how evil this man is, the entire products they are pushing make it look like Kony is running for US President and glorify him to heaven and beyond! Their explanation for this is that they want to make him famous!!!!!!! Kony being an absolute shrinking violet will of course hate this….NOT! He is a egotistical megalomaniac with a Messiah complex, he will be beside himself that teenage girls all over the planet will be glorifying his name!
They are lobbying the most well known mind controlled puppets like Rihanna and Justin Bierber to promote their campaign.
Given that Kony has not been seen or heard tell of in Uganda since 2006, one has to wonder why the big WHoo Haa now! 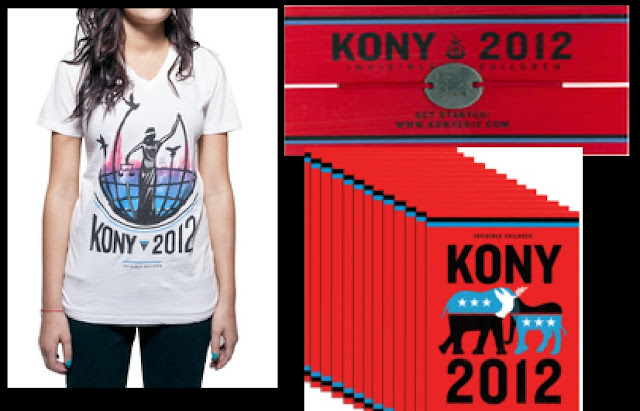 The viewer is then subjected to the most blatant forms of mind manipulation, the cute kid, the crying victim, all laced with emotion triggers that have long been proven to manipulate the viewer into the exact emotional response that they want.
From start to finish you are taken on an emotional roller coaster, designed so as your emotions will over ride your logic and critical thought abilities.
But when you watch it with your critical thought switched on, you see a very different picture!
Luis Moreno-Ocampo from the International Criminal Court is interviewed, and comes across to those who have no experience of Ocampo as a lovely man who wants to bring this vile criminal to Justice! Last year I had very personal experience of Ocampo during the Libyan Campaign, it was Ocampo who issued warrants for the arrest of Maummar and Saif al-Islam Gaddafi, it has since transpired that the crimes they were accused of were fictitious, but the ICC warrants had to be issued so as the UN could be justified in invading Libya and getting their greedy fucking hands on Libya’s vast resources!
My blog demanding the ICC produce the evidence against Gaddafi.

Ocampo paid a major roll in this plan, and on numerous occasions I personally contacted his office to demand he show the evidence of the crimes Maummar and Saif were accused off, after numerous phone calls to his office and emails, I have yet to get a response!
I rang the ICC on numerous occasions, you would think that a big well know body like the ICC would have at least 4 receptionists taking calls, they had one security man, who repeatedly told me things such as, “no one is here to day, they all have the day off”, his most common response was just to hang up when he heard my voice! They are non contactable, and they are non-accountable!

The whole world was witness to what the UN done in Libya, in their efforts to take control and install their puppet government, they slaughtered tens of thousands of Libyans, and we watched in horror as Muammar Gaddafi was sodomised, beaten, tortured and executed by the UN and ICC backed “rebels”. Not content with the execution of Muammar, they also killed his sons Mutassim, Khamis and Saif al-Arab, three of his grandchildren and his son in law. A shoot to kill was issued for Saif al Islam, but by the grace of God, the Tribe who captured him realised he was a good negotiating tool and kept him alive.
This is Justice Luis Ocampo style, do not be taken in by his demeanour and fancy title, this man is a war hungry fecker!

We are told over and over that the US has no vested interest in Uganda!!!!!!! BULL-FUCKING-SHIT! They have a colonial vested interest in anywhere that has rich resources, and that includes Uganda! For many years they have financed, trained and armed these terrorist groups globally, divide and conquer is their motto, it serves them to back these vile people, as a country divided is easier prey for them to invade. They have used these tactics for decades in the Middle East, Africa, South America, and my own country, Northern Ireland! The thirty years “troubles” that we lived through were totally financed by the US, then when the British Troops were needed for the invasions of Afghanistan and Iraq, they stepped in like the Messiah and halted the whole thing! The reality of the situation was that instead of giving money for bombs and bullets, they started spending the money on jobs, housing and infra-structure, which they could have done at any time, but instead they done it at a time that suited their agenda!
Who has armed trained and financed Kony! I’m sure I won’t have to scratch the surface too far to see the CIA’s foot print all over it!

This very sassy production highlights that Kony must be stopped at all costs, but gives no lip service as to how this might be done, they present it as “GOOD” that Obama has already sent US troops to Uganda, and that more need to be sent. Death toll in Afghanistan ONE MILLION people, death toll in Iraq ONE AND A HALF MILLION PEOPLE! Death toll in Libya tens of thousands……..Yeah the good old US of A will sort the problem out! Sending the gung ho US troops in would be like using a cruise missile to swat a fly! In their effort to find Kony and kill him they will murder thousands. As for their claims that they want him alive to face trial…..more bullshite, they said that about Gaddafi as well, but once in Libya they relentlessly bombed any area which supported Gaddafi, given that Gaddafi had the support of over 85% of the Libyan people that meant they pretty much bombed everywhere! They bombed the fields, the roads, the water and electric supplies, Universities, hospitals, schools, and one town after another! They totally smashed the infra-structure of the entire country, and they have now sent in their global corporate buddies to re-build everything they destroyed. The Libyan people will be paying for all this. They used the same blueprint in Afghanistan and Iraq, and now they have set their sights on Uganda and bordering countries.

And here’s the best bit!!!! Kony is not even in Uganda, and has not been there for at least 6 years! But IC fails to mention this in the video! The US wants a justifiable reason to go into Uganda and use it as a base to then invade the Congo and Sudan, and God knows what other bordering countries!
Today IC have issued a statement, it would seem there is more than me who smells a rat, in it they say:
“The LRA left northern Uganda in 2006. The LRA is currently active in Democratic Republic of Congo, Central African Republic, and South Sudan. Invisible Children’s mission is to stop Joseph Kony and the LRA wherever they are and help rehabilitate LRA-affected communities.”

Their video is urging US intervention in Uganda, yet they admit themselves that Kony is not even in Uganda! Incredible! They say he is in Congo but their entire campaign is aimed at getting US troops into Uganda! Please people see this for what it is, they have colonised most of the Middle East, through either invasion or puppet governments, Libya was just the beginning of the African Campaign, and IC are paving the way for their first stepping stone to get troops on the ground in Uganda., Congo, Sudan and Somalia will be next, and this video is a blatant attempt to get the public to actually demand that they do this.
In this vid General Wesley Clark testifies that around the 20 September 2011, just after 9/11, he was told that the US was going to invade Iraq, Libya, Syria, Lebanon, Somalia Iran and Sudan.
They are trying to get top pop stars to support their campaign, Rihanna, Justin Bierber and others, these people are under mind control, and they will be Tweeting Jack Shit unless they are ordered to do so! Already today these “stars” have been Tweeting about this! This is how they control the masses, they create these icons for the young and the gullible to follow, and sadly millions cannot see past this.

Today IC have also posted a breakdown of the Charities finances, they presented it in such a way as to make it look like they were a real legit non-profit charity! And just like their vid it is designed to deceive! Notice how the yellow section, which is the section related to how much they actually spend in Uganda is thicker than the other sections, I had to blow this way up just to see the figures of their expenses. My simple breakdown underneath will give you a much more realistic view of their spending!
THIS IS TAKEN FROM THEIR OWN WEB SITE, IT IS THEIR ACCOUNTS FOR THE 2011 FISCAL YEAR

Here is a breakdown of their spending:

So, to wrap this up! $3,303,228 was spent in Uganda, and $5,591,400 was spent on them, and the well oiled machine that is feeding the cash cow! Can anyone else see anything wrong with this picture? I have not used any fancy graphs, yet my simple presentation of their finances speaks volumes more than their presentation!
Total funds collected $8,894,630!

forces troops to Uganda to join the civil war there. In the next few months, US combat

troops will be sent to South Sudan, Congo and Central African Republic. They will only

invasion of the African continent is under way.""


The very best rant on You Tube currently! Another great expose on "Kony 2012" campaign


LINK Excellent link from "Activist Post", which covers in greater detail "Invisible Childrens" past and agenda.

I will leave you with this comment from  Professor Chris Blattman
“There’s also something inherently misleading, naive, maybe even dangerous, about the idea of rescuing children or saving of Africa. It’s often not an accidental choice of words, even if it’s unwitting. It hints uncomfortably of the White Man’s Burden. Worse, sometimes it does more than hint. The savoir attitude is pervasive in advocacy, and it inevitably shapes programming. Usually misconceived programming. The saving attitude pervades too many aid failures, not to mention military interventions. The list is long."