This video was made to accompany the blog, it has all the pictures included in the blog. Backing track All Angels. 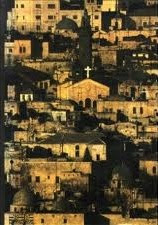 Yesterday (18/08/2012) while browsing in a Charity Shop, this book literally jumped out at me, it is a hard back copy of a Book about Jerusalem.

The pictures in this book tell a story of three of the Worlds most prevalent religions, which are all rooted in this ancient city. Islam, Christianity and Judaism all claim ancestry from this City.

These amazing pictures were taken during the 1960’s, they capture moments in time that I felt should be available on line. The historical, religious and political interest in Jerusalem is Universal, because of my own personal appreciation of these pictures, I felt others would also appreciate them, so I have dedicated a whole day to scanning them and making them available on line. My scanner is ancient in PC terms, and it is attached to my equally prehistoric PC, so scanning them to file was a laborious process.

This blog is not about my personal religious or political beliefs; it is merely to make these images available on line. All commentary will be taken from the book unless otherwise stated.

The book was published in 1969 by Heinemann, then in 1976 by Time Life Book’s, the Author is an Englishman called Colin Thubron, and the photographer Jay Maisel, a native of New York. Both author and photographer strived to document the city and its inhabitants without prejudice.

1. The City of Earth and Heaven 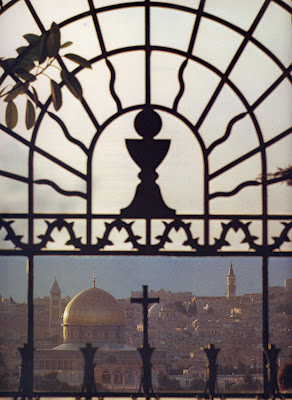 Christian symbols of cross, thorns and chalice in Dominus Flevit church overlook one of Islam’s greatest shrines, the Golden Dome of the Rock. The Dome itself stands on the site of the Temples of Solomon and Herod, sacred in the memory of the Jews. 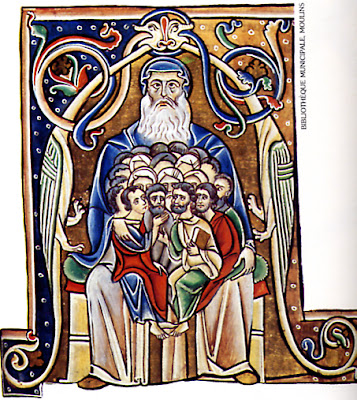 The Fatherly Abraham cradles in his lap members of Jerusalem’s three faiths-Judaism, Christianity and Islam. In this twelfth century illumination from a French Bible.

Although the three religions differ radically, they all venerate the Patriarch who broke from the worship of many Gods to focus on one God alone. 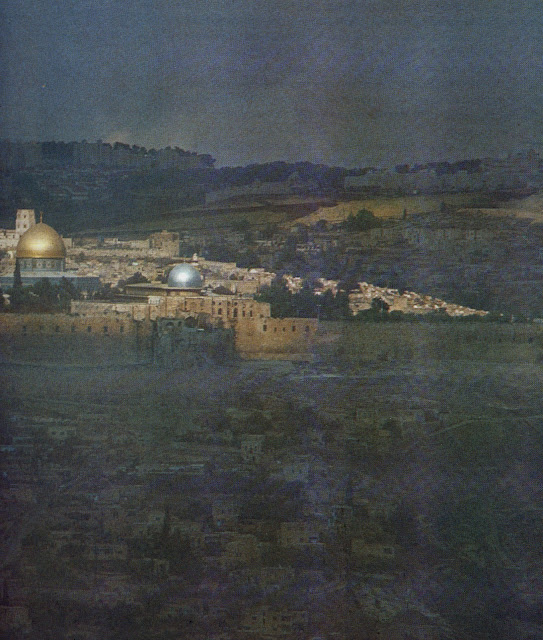 A trick of the light on a misty winter’s day trims sprawling Jerusalem to the proportions of the Old walled city. 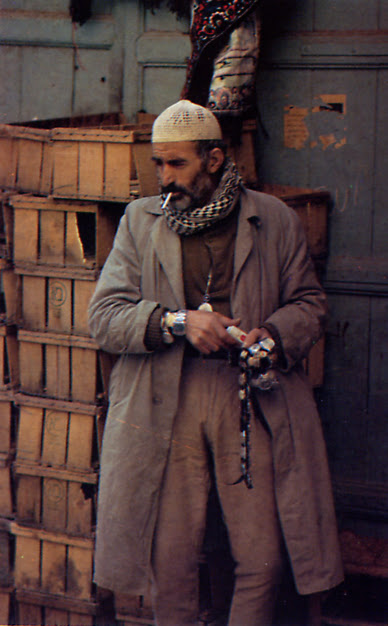 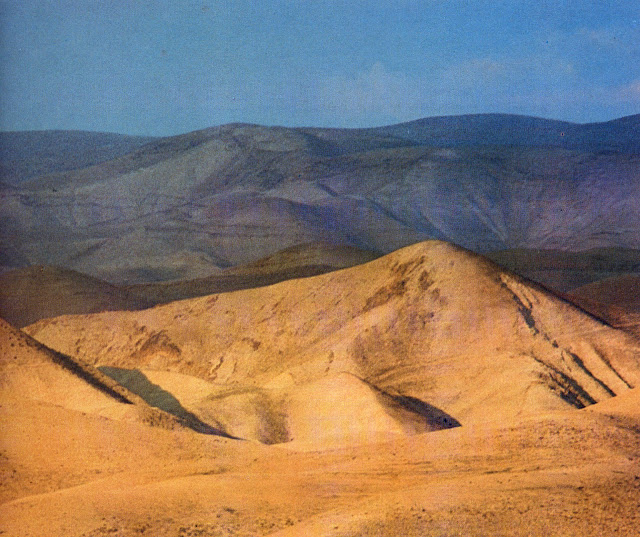 The realm of Biblical seers and prophets, the eroded Judean Hills to the East of Jerusalem stretch to the horizon in parched desolation.
This is the so called Wilderness where John the Baptist preached, and Jesus came to fast and meditate for 40 days and 40 nights. 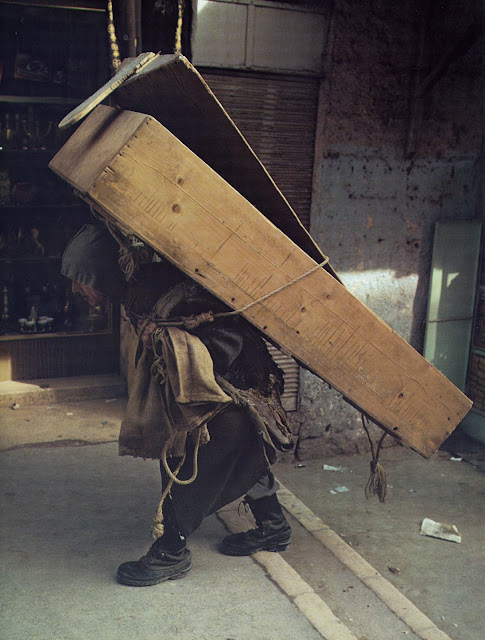 Bending beneath his sombre load, a porter carries a coffin of rough boards, its lid ominously agape. Its destination: A Christian dwelling, where a man has died. 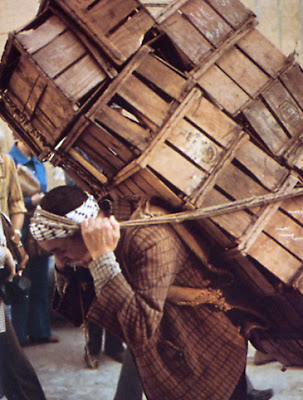 2. The Place of David 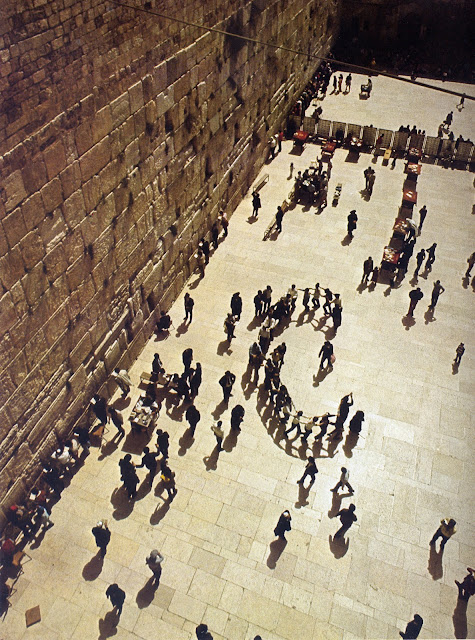 After finishing their service one group starts a joyful dance while others still pray at the wall. The woven screen separates the men from the women.

Survivors of Herod’s day, The stables of Solomon were misnamed by the Crusaders who kept their horses here. The piers and vaults still support a broad esplanade, once part of Herod’s Temple complex.

4 The Presence of Christ

Keeping watch over the site of Christ’s tomb, in the church of the Holy Sepulchre is an icon of the Virgin Mary. Her face and hand have been blackened and effected by age the heat and soot of the candles and the kisses of Pilgrims. 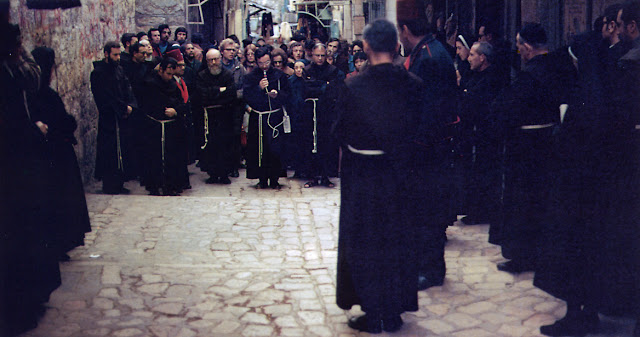 Led by Franciscans, the procession of Pilgrims that sets out every Friday to retrace Christ’s steps to Calvary halts for prayers (aided by a microphone), at the seventh station of the cross. 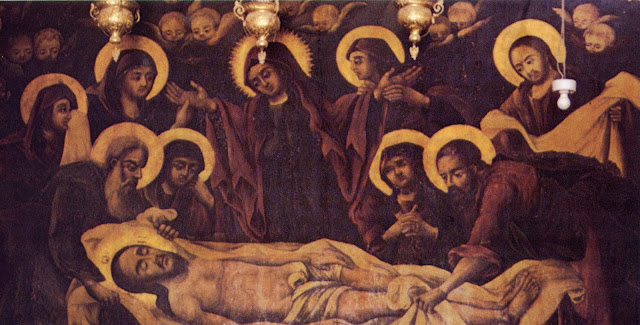 The washing of Jesus’s body after it was taken from the cross, an event that according to belief took place on this spot. 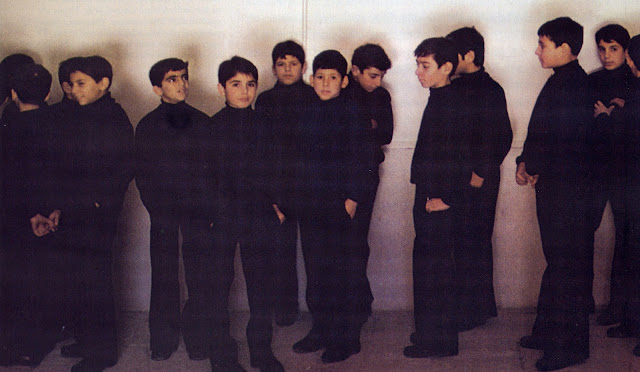 Uniformed boys from the Armenian school line up at the entrance to the Holy Sepulchre, where they have come to worship. 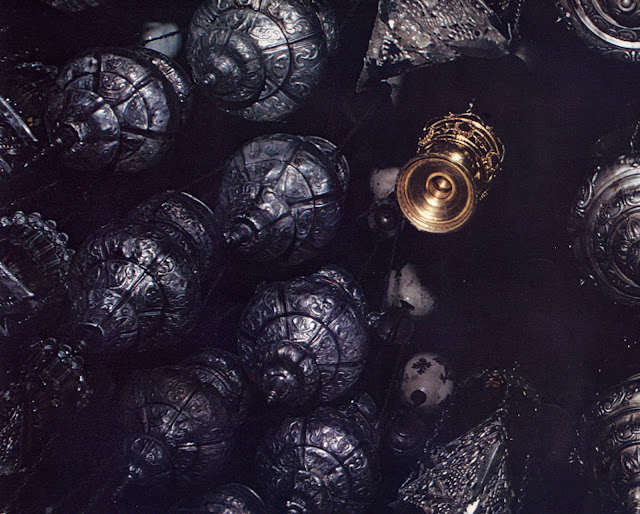 Votive lamps suspended above Christ's tomb by various sects suggest the crowded conditions prevalent in the church of the Holy Sepulchre. 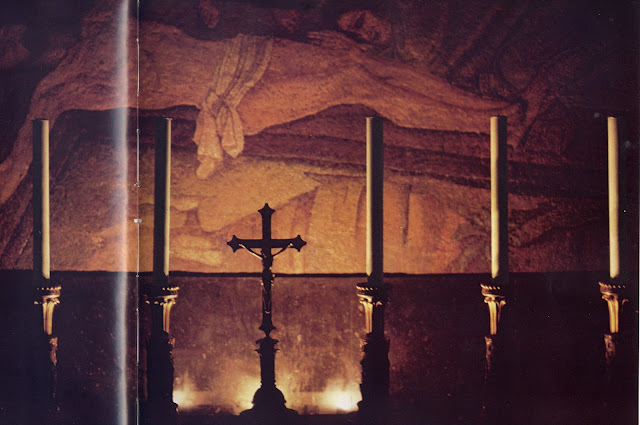 The Franciscan order, reputedly established in the Holy Land when St. Francis travelled there in 1219, has been the chief representative of the Roman Church in Jerusalem ever since the Crusader period.
Dimly lit, a modern mosaic of the Crucifixion rises sombrely – and symbolically – behind the altar of the Franciscan Chapel on the side of Calvary.
The simple Franciscan Chapel of Calvary inside the Church of the Holy Sepulchre stands on the spot where the Crucifixion is believed to have taken place. 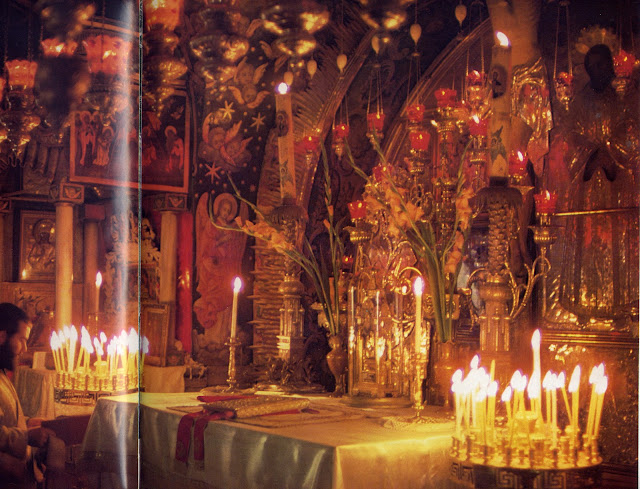 Only a few feet from the plain Franciscan chapel, a blaze of candlelight shed a golden lustre on the Orthodox Chapel of Calvary. 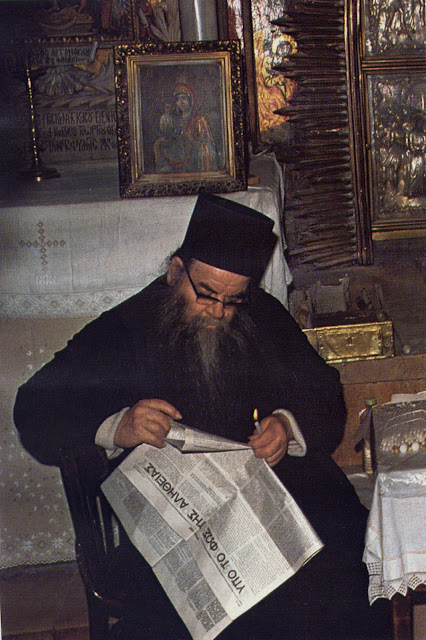 An Orthodox Priest on duty borrows a votive candle to read his paper.

An archway through which Jesus is supposed to have passed through as he carried the cross to Calvary. 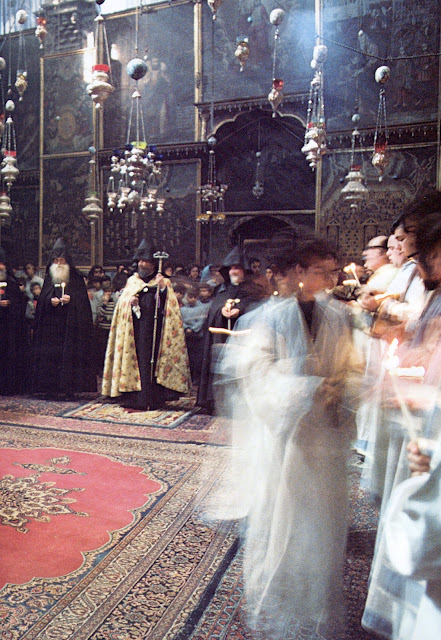 Armenian Christians have been in Jerusalem for over 1,500 years. Like the Eastern Orthodox and Roman Catholics, they have secure rights in the church of the Holy Sepulchre.
Choir, congregation and hooded clergy celebrate the liturgy in the huge Church of Saint James, rich with lamps, wall tiles and fine carpets. 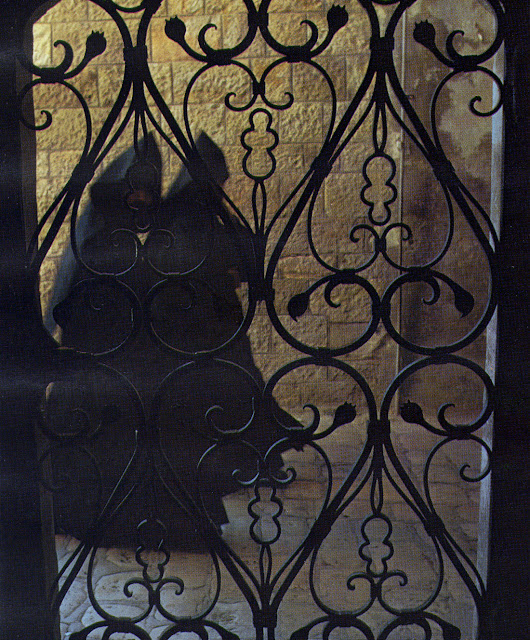 Unmistakable in their pointed hoods, Armenian Monks pass by a grille. 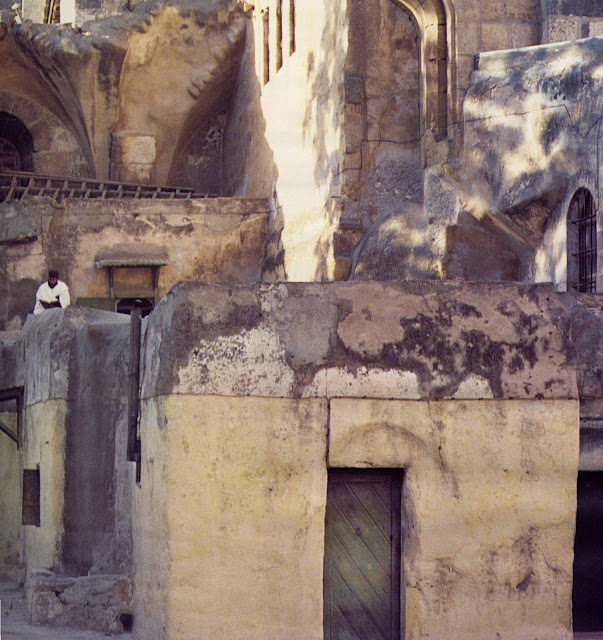 In the vicissitudes of its history the small but ancient Ethiopian, or Abyssinian, sect has lost most of the rights of possession it once had in the church of the Holy Sepulchre. The Monks now live a humble, contemplative life on the roof of the chapel of Saint Helen, stubbornly guarding their privileges against the rival claims of neighbouring copts.

On the roof of the Holy Sepulchre, interlocking walls and arches of different periods give the Ethiopian Monks a small complex world of their own. 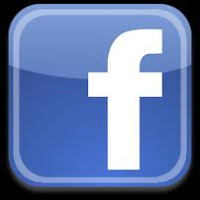