This is video 1, Jo Cox, The Sacrificial Lamb
I will be adding much more information and links to this blog when I find time.

Part 2 in the video series, I will hopefully get part 3 up this week. 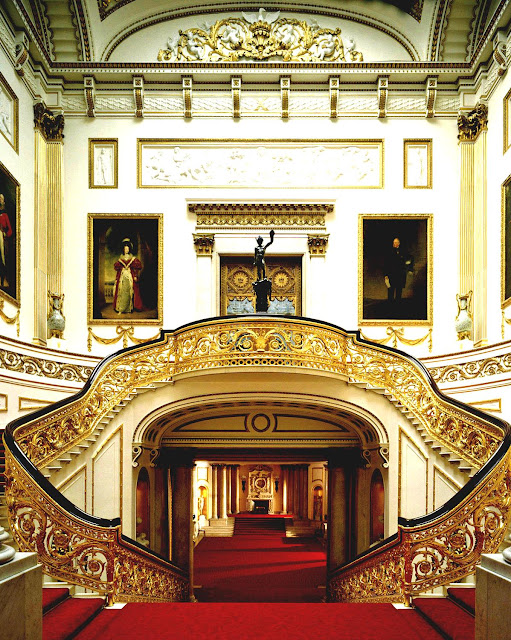 In part 1 I looked at the reverence John Dee attached to Mercury, the above pic is the grand staircase in Buckingham Palace, the statue that can be seen on the landing is Mercury.
Now saying you revered a particular God, and you wanted to give that God a commanding spot in your home, there could not be a more commanding spot than this one!

THE PULSE, THE PENTAGRAM AND BREXIT
Short vid (4.33) linking the Pulse, Brexit and Christina Grimmie, Lucifer is the connecting dot!
https://www.youtube.com/watch?v=VKViL2bT2ds
This morning I was watching supposed survivors of the Pulse Nightclub shooting, I noticed something very odd, they all seemed to be wearing clothes that had pentagrams on them.
I have already documented links between the Pulse shootings, the shooting of Christine Grimmie and the Brexit vote in the UK ,  the pentagrams also tied in, as the EU flag has a circle of pentagrams.

Christina Grimmie was shot on Friday June 10, Friday is named after Venus, from Wiki:
The name Friday comes from the Old English Frīġedæġ, meaning the "day of Frige", a result of an old convention associating the Old English goddess Frigg with the Roman goddess Venus, with whom the day is associated in many different cultures. The same holds for Frīatag in Old High German, Freitag in Modern German, and vrijdag in Dutch.  Source


Some of the pics used in this vid were taken from this site, this guy has compiled a lot of information and pics on the use of the pentagram. LINK

This you Tube Channel "IAMME857",  has also made connections with these events and Gematria. Link

LINKS:
Lucifer worship, survivors account: LINK
Orlando Pulse event, witnesses and casualties all with 5 pointed stars on their cloths. As covered in part 2, the symbol for Christina Grimmies band is the symbol for Phosphorus, the morning star, now known as Venus, the five pointed star is the symbol of Venus. The bible translated Phosphorus to Lucifer! LINK
Crisis actress Christine Leinonen is interviewed by Anderson Cooper, this is just days after her sons apparent brutal murder, and it beggars belief! Link
Academics try justify Dee's sorcery LINK
The Chymical Wedding 1616  LINK
John Dee Wikipedia LINK
The truth about Shakespeare, includes depiction of Dee and Bacon LINK
Dee & Bacon LINK
Francis Bacon Rosicrucian   LINK
Queen, Harry, Obamas, Invictus games vid LINK
Arrest of Tommy Mair. He appears to have suffered a head wound during the arrest, and he has a large cut on his elbow. There is blood on the road from his head wound, and a little on his T shirt from the cut on his elbow, bar this, there is no blood on his clean grey T shirt.
When a neighbour was interviewed, she said that she had spoken to him that morning, and he was wearing a grey T shirt, so he had not changed his clothes. LINK
Posted by Truthseeker444 at Monday, June 20, 2016