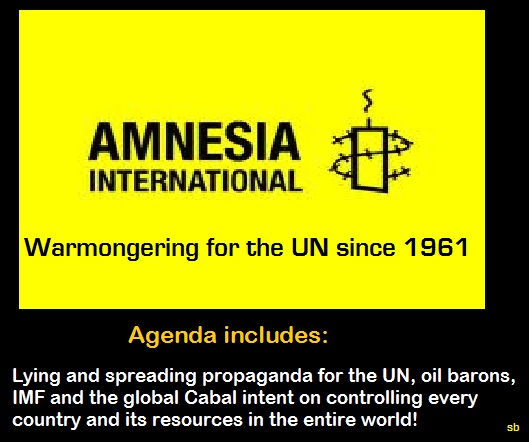 Amnesia International
I frequently contacted Amnesia International during the UN bombing of Libya, which got me on their mailing list, you would not believe the war mongering shit I get from them, today I snapped and responded to the shite they send me, apologies in advance for swearing!
I have just received 2 emails telling me the email address does not accept return mail, and I have been given another email address to send my complaints to, so I will publish all correspondence.
Their email to me dated Monday, 13 February 2012, 17:44
Dear Sandra,

Tomorrow marks the one-year anniversary of the start of protests in Bahrain. Tens of thousands are expected to take to the streets to protest a government that has committed terrible violence against its own citizens.

When Bahrain's streets awaken in protest tomorrow, will government forces crack down on peaceful demonstrators again? Will there be more tear gas, torture, killings?

We don't know what will happen tomorrow. But we do know that tragedy is not inevitable.

Take action for a better tomorrow in Bahrain. Call on the Bahraini government and security forces to respect peaceful protest and assembly -- today, tomorrow, and for all the days to come.

As protests enter their second year, the Middle East and North Africa remain in turmoil. As I wrote you over the weekend, the crisis in Syria is escalating. Civil society is under attack in Egypt. We can't let violence against peaceful protesters rekindle anew in Bahrain.

If the Bahraini government keeps its promises -- to end torture and excessive force, to release peaceful protesters from prison, and to hold those responsible for abuses accountable -- it should have nothing to fear from nonviolent protests demanding political reforms.

Under pressure, Bahrain's government has taken some positive steps forward -- but human rights violations continue in the country. Scores of people sentenced to prison terms for exercising their rights to freedom of expression and assembly during last year's protests are still facing criminal charges.

Two of those prisoners, leaders of the Bahrain Teachers' Association, face a critical hearing this coming weekend that could grant them their freedom -- or keep them jailed for years.

The situation in Bahrain is dire, but it is not hopeless -- and we can have tremendous influence. Bahrain takes its international image seriously. And since Bahrain is a country with such close ties to the U.S., the Bahraini government is uniquely susceptible to pressure from the U.S. government and U.S.-based activists.

Your action today could mean peace in Bahrain tomorrow. Tell the Bahraini government that you are watching closely -- and that when tomorrow comes, you expect them to do the right thing for human rights.

With hope for tomorrow,

My reply:
On Friday past a man called Robert Green was jailed for one year in a Scottish court! His crime was trying to get justice for a lady called Hollie Greig. Hollie who is Downs Syndrome was sexually abused from the age of 6 to 20 by a gang of establishment paedophiles in Aberdeen.
It was reported to Grampian police and despite their claims that they thoroughly investigated, Hollie's abusers under oath at Robert's trial all admitted that not one of them was questioned!
Robert's only crime was trying to get justice for Hollie, so before you start with the UN propaganda, take a look closer to home, and see what you can do to stop the Free Masonic control of the UK legal, justice and government of our country, which protects establishment paedophiles, and jails anyone who complains!
http://holliedemandsjustice.org/
You make me fucking sick, pointing the big moral finger at other countries, when our own country is run by an evil Cabal of paedophiles!
Go investigate Gautanamo Bay or the 333 people who have died in or just after being in police custody in the UK over this last 10 years!
Stop doing the dirty work for the arms manufactures, IMF and oil barons who want control of Syria and Iran!
After the "baby incubator" scandal that got the USA into the first gulf war, you would think that Amnesia would have remembered not to LIE for the warmongering cabal, but apparently you learned nothing! Now your at it with Iran and Syria, the world over activists are waking up to AI's agenda, and your part in starting wars.
Sandra Barr

Their email to me dated Saturday, 11 February 2012, 17:44
Dear Sandra,
The death toll continues to rise in Syria. Hundreds of largely unarmed people have reportedly been killed in the city of Homs alone. The crisis in Syria is escalating.  The world must do everything in its power to end the Assad regime's violent crackdown. Instead, Russia, a country with influence over Syria, appears to be standing by while crimes against humanity are being committed.  Demand that Russia put real pressure on Syrian authorities to end the military assault on Homs.  Last weekend, Russia, together with China, vetoed a UN Security Council resolution on Syria, crushing one of the last and best hopes of ending the violence that has claimed thousands of lives since March. The resolution -- though watered-down -- was the closest the global community had come to taking firm action toward ending the violence that has brought Syria to the brink of civil war.  While diplomats wrangled at UN headquarters over the weekend, the Syrian government unleashed a barrage of attacks in Homs. The attacks included the use of heavy weaponry such as tanks in residential areas and claimed hundreds of lives, killing more than a dozen children.  As the Assad regime's strongest foreign backer, Russia is poised to play a central role in stopping the killing and preventing the bloodbath that will occur if fighting between the government and protesters continues unchecked.  Join Amnesty's millions-strong global human rights movement -- demand that Russia take steps to bring an end to the grave human rights violations that are being committed in Syria.  When Russia blocked the Security Council from taking meaningful action to stop the massive human rights violations in Syria, it stated that it has a better plan for resolving the crisis. But its veto has only served as a green light to the Assad regime to continue to use any means to crush the resistance.  Urge Russia to take public and decisive action to oppose the atrocities being committed in Syria.  Sincerely,  Sanjeev Bery Advocacy Director, Middle East & North Africa Amnesty International USA
My reply:
The crisis in Syria is escalating because the UN has sent in the same paid mercenaries that they sent into Libya!!!!! Please do not insult my intelligence! They are murdering Syrian citizens, then showing the footage, and blaming it on the legitimate forces of Syria!
As for Amnesia International beating the drums of war to invade Iran....you make me fucking sick!!!!!
Will the UN go in and carpet bomb them the way they did the Libyans to save them all!
Stop acting as the UN war warmongering machine, grow up and grow some fucking balls, do what your meant to do, expose the evil that is behind trying to start these wars for profit and power!
The IMF and the oil barons are now controlling Libya, the same people want control of Syria and Iran, so stop doing their publicity! The British and French have divided it up into bite sized chunks, brought in foreign workers to the oil fields, and cut the Libyan people off, go and investigate that!
As for government forces curtailing peoples legitimate right to protest, start with the UK and USA who in this last year have on numerous occasions attacked peaceful protesters! The day before the Royal wedding numerous people were arrested on the premise that they might stage a peaceful protest, so stop with the shit about Iran!!!!!
Sandra Barr


This is the response they sent me!!!!!
Dear friend,Thank you for speaking out on behalf of human rights. We know your time is limited, and we appreciate your efforts that much more. Believe us when we say that together we are making a difference.Amnesty International works worldwide to defend human rights and uphold human dignity. We need your support now more than ever. If you have a moment, please make a donation today. Any amount will help. Visit: www.amnestyusa.org/donateAnd if you're looking for t-shirts, music, or other gifts - shop Amnesty. Make a statement and show your support for human rights. Visit: http://shop.amnestyusa.orgThanks again, we'll keep you posted on how things turn out.Sincerely, Amnesty International USA


Seems Im not the only one who has woken up to AI's agenda! excellent piece about the corruption of Amnesia!  http://www.silviacattori.net/article2286.html
Blog Archive

The Unicorn in Captivity, a poem by  Anne Morrow Lindbergh
http://truthseeker444.blogspot.com/

The Illusion of Western Democracy. 27/10/2011
http://truthseeker444.blogspot.com/2011/10/illusion-of-western-democracy-message.html

Hair, Its Magical Mystical Properties, and how to go Chemical Free. 23/09/2011
http://truthseeker444.blogspot.com/2011/09/hair-its-magical-mystical-properties.html